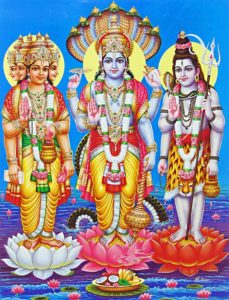 In the Vedic tradition, the ancient root of yogic philosophy, the concept of God or Supreme Reality is understood in a three-fold manner. The triple function of God, Trimurti in Sanskrit, is expressed as Brahma the creator, Vishnu the sustainer and Shiva the destroyer. Each energy has a specific task. Let us examine them.

Lord Brahma is the creative aspect of God and his consort is Goddess Saraswati. Brahma is depicted with four heads, allowing him to see in all four directions. He carries a bow, scepter, water jug and book which is understood to be the Vedas. Saraswati presides over knowledge and wisdom. Those who pursue knowledge, creativity, and academic excellence and follow the jnana yoga path invoke this
aspect of the divine.

Lord Vishnu is the preserving aspect of God. He protects dharma and universal order. His consort is Goddess Lakshmi who administers abundance and material resources for those treading the householder path. His blue image wearing a hood of snakes and carrying a conch shell, club, discus and lotus is a gentle one. The planets in our solar system that sustain life are said to be manifestations of Lord Vishnu. Devotees of the bhakti path call upon this aspect of Spirit.

Lord Shiva is the aspect of God that destroys and his consort is Parvati, the Goddess who resists and realigns. Shiva eliminates waste, excess, attachments, imperfections and undesirable thoughts, habits and tendencies. His head is adorned with a crescent moon and a third eye. The snake around his neck
indicates the courage necessary for inner transformation. Shiva energy appeals to those involved in solitary and rigorous austerities and meditation practices.

All natural phenomenon and spiritual evolution, however, begin with destruction. The great Yoga Masters remind us that we must empty our glass before we fill it. Only then can creation and preservation occur.