The Myth of RAHU and KETU: the Lunar Nodes 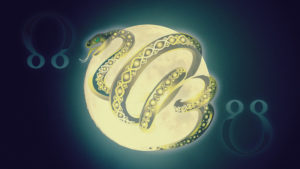 In Vedic Astrology, Rahu and Ketu are the important Lunar Nodes. Unlike the seven visible planets, Grahas in Sanskrit, they are massless yet potent mathematical points in space, sometimes referred to as the shadow planets. Our solar system is structured such that it takes approximately 365 days for the Earth to orbit the Sun and approximately 28 days for the Moon to orbit the Earth. These two orbital paths are independent of one another. Twice a year, however, the paths intersect creating solar and lunar eclipses. For a short time, the Sun or Moon is overtaken by the darkness of one of the nodes. Rahu is the ascending point where the Moon’s orbit cuts through the Earth’s orbit. Ketu is the descending point. They are always opposite each other in the sky or birth chart, and the main force of karma and desire can be seen along its axis. Their function in Vedic Astrology is better understood if we familiarize ourselves with its associated myth.

The story is told in the ancient Puranic texts of the time before creation. After a long and horrible war, the gods and demons cooperated to churn the galactic material called the Milk Ocean. This activity created Amrita, a nectar of immortality intended for the gods alone. One of the demons, however, sitting between the Sun and Moon, managed to take a sip. Lord Vishnu, the sustainer of the Universe, quickly decapitated him. Rahu is the head of the serpent demon without the body. Ketu is the tail without the head. As they were now immortal, Lord Vishnu needed to find a spot for them, so he placed them in two specific points in the sky. By eclipsing the Sun and Moon twice a year they can create confusion and exact revenge.

The misunderstanding of our true nature allows us to exist under the illusion that we are separate from the universal law of creation. According to Vedic wisdom, each planet is an expression of our own divine consciousness. The nodes bring together Earth (body), Sun (soul) and Moon (mind), making them among the most influential in Astrology. In the planetary cabinet, Rahu is the advancing army. He has a voracious appetite without, however, the ability to digest. He is responsible for obsessions and desires that push us to our limits. Wherever Rahu is there is inexperience. Ketu is the occupying army. He governs things we have learned very well. He withdraws and leads us out. He can confer contempt or wisdom, then non-attachment, and ultimately moksha or liberation. In an individual birth chart or by transit in the sky, the Rahu/Ketu axis tells us what we absolutely must do so we may be freed from worldly desire. The nodal axis travels slowly, changing zodiac signs once every year and a half. But wherever they are, Rahu and Ketu create confusion. Rahu’s domain is the confusion of ignorance; Ketu’s territory is the confusion of certainty. The study and understanding of Vedic Astrology is itself a spiritual practice which naturally engenders reverence for its inherent guidance and wisdom.