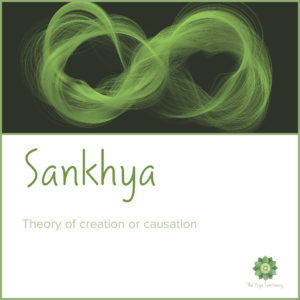 The dualistic theory of creation or causation is called Sankhya Philosophy and it appears in texts as ancient as the Upanishads and the Bhagavad Gita. Its founder was the sage Kapila who is considered by scholars to be older than Buddha. It is also the theory of creation recognized by both Yoga and Ayurveda.

Sankhya means “empirical” or “number.” It explains creation in a manner where the implicit becomes explicit and where there exists neither production nor destruction. All of creation stems from the two facets of Sankhya: Purusha and Prakriti. Purusha is pure consciousness, the soul, Self, or knower. It is not substance, rather essence, beyond time and activity. Prakriti is matter and Nature. It is the power of manifestation in all objects and holds all three Gunas in equilibrium.

Modern science affirms Sankhya Philosophy. The First Law of Thermodynamics states that energy can be transformed, but neither created nor destroyed. Einstein’s equation E=mc² explains that matter and energy are interchangeable. Energy is stored in matter and matter can be converted to energy. The constant speed of light (3 x 108 m/s) is the factor c. Moreover, the dualism of the Particle-Wave Theory holds that light behaves like a wave and a particle at the same time.

In short, both the ancient philosophy and modern science contend that there is no difference between the energy that grows a walnut and the walnut itself. All of existence is two things at once.