Yogi of the Month: Anita Weisglass 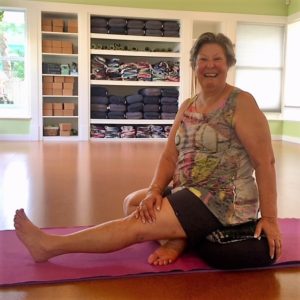 The Yoga Sanctuary: Tell us a little about yourself.

Anita Weisglass: I was born in Greece in 1937, which means that I am a survivor of the Holocaust. My family name is Castro, a Spanish name, and that means that my ancestors came to Greece in 1492 when they were expelled from Spain because the were Jewish. We survived the Holocaust with the help of Greek Orthodox families with whom we went into hiding.

We came to the United States in 1952 under the Displaced Persons Act that President Truman enacted. We settled in Boston.

In 1961, I went to Israel to visit family and while there I met my husband, Max, who was also visiting family. His home was Montreal, Canada, and that is where we went after we married.

In the 1970’s, he moved his business to Houston, Texas, and we lived there for 20 years. My husband always dreamed of moving to Florida to enjoy boating and fishing. We came here 21 years ago after his retirement.

TYS: When did you first start yoga and what are its greatest benefits for you?

AW: I started practicing yoga with Bonnie, the former studio owner, at what is today the YMCA many years ago. Bonnie and Yoga opened a new world for me, a world of exercise and relaxation. For one hour during yoga practice, I concentrate in a peaceful way and the world and its challenges fade away.

TYS: What is your favorite yoga pose and why?

AW: Yoga is relaxing and keeps my body flexible. I look forward to the days when I have yoga practice. And, of course, my favorite pose is what comes at the end of all the work I have done—Savasana!!